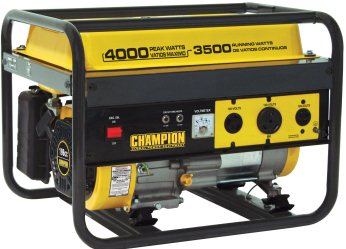 Today, we’re going to feature a review of a fairly powerful generator from Champion—the Champion Power Equipment 46533. This is the perfect solution to your outage problem and won’t let you down, ever. Use your laptop, refrigerator, and dryer even when power supply is interrupted. You could never go wrong with this affordable yet extra powerful generator from Champion Power Equipment.

Households from across the United States are using this compact and hi-powered generator to run their appliances during an outage or while outdoors having barbeque parties, celebrating an occasion, or simply spending time with each other. Indeed, quality time would never have to be interrupted with this generator.
I found out that many users have nothing to say but good things about this generator. I believe that this generator has a fairly powerful muffler on it although it makes some noise as its side effect. However, I see no problem to that since generators are commonly a little bit noisy.

Meanwhile, I also found out that this generator has an average of 4 out of 5 stars ratings, so I can say that if you’re looking for a good generator, then this one may be a good choice. I can recommend this to anyone who is looking for a generator that isn’t only very good but also affordable. When I tested it, it could run a home vacuum and a 1500 space heater w/ a blower without having any problems at all.

So, what makes this generator great? This is dependable and portable for your jobsite and campsite, too. It has a watt rating (running wattage) of 3500 watts while it can also work at 4000 watts of max (surge) output. This generator can power any electrical appliances. It can also run up to three power tool. When it comes to the engine, I can say that it’s dependable for its 196cc OHV that has a cast iron sleeve. It can also run for 12 hours at about 50% load.

Another good thing about it is that it is EPA-approved so you can look forward for a pollution-free use of it. Other features I found useful are its durable frame, a twist lock receptacle, and a low oil sensor. With the sensor, you can when your oil needs to be refilled and thus prevent potential engine damage.

I also would like you to know that you can save big if you can find the best deals online. Upon comparing, I found out that Amazon has some of the best deals on generators, which allow you save some money as compared to other sellers.

Another benefit about this generator is that it’s CARB Compliant, so you know that it follows regulated standards. When we say CARB Compliant, it means that this generator follows with the standards on air pollution established and set by the California Air Resource Board. This regulating body also manages motor vehicle pollution and air sanitation.

We think that its run time is helpful and practical. Imagine that you can run your electrical-powered appliances even in a power outage. Plus, this generator weighs only 110 pounds, so it’s much more lightweight than any other of its kind.

Overall, the Champion Equipment 46533 is a great buy and such as portable choice for many household owners. It comes with a long running time and has a compact size meaning it isn’t as heavy as bigger units. Every generator is also backed up by a two-year warranty.

This generator is often on sale on Amazon.